Week 4 was an interesting week for the league even without New England playing. Chicago got their first win (Go Bears!), Drew Brees broke the Dallas Cowboys hearts in overtime, and Seattle’s win came down to a controversial call. What else did we learn from week 4?

Dolphins Drowning
If you watched that game that was shown from the other side of the world, you would’ve seen just how dominant the New York Jets was against the Miami Dolphins. Miami’s running game was nonexistent, Ryan Tannehill looked frantic, that supposed-to-be amazing front four was just as noticeable as the oxygen we breathe, and NOBODY could guard Brandon Marshall. Even before this abomination, the Dolphins were struggling. Their only win came in week 1 against the Washington Redskins. They came from behind to pull that win out. Outside of Jarvis Landry, the offense looks as stable as a wooden bridge in the Indiana Jones movies. Their coach, Joe Philbin, was fired this morning.  There are rumors that Tannehill was belittle practice squad players and that the coach told the defense to not play hard to get Tannehill’s confidence higher. Not to mention they paid a boat load of money to Suh, and the Dolphins defense had only one sack entering Sunday’s game. More changes might be on the rise in South Beach.

Gurley Was Worth The Wait
When the St. Louis Rams drafted Todd Gurley in the first round back in May, they knew they would have to wait a little longer to get production from the rookie. Gurley tore his ACL in his final year at Georgia. He debuted week 3 against the Pittsburgh Steelers but didn’t play much. This past week against the Arizona Cardinals, his numbered was called and he delivered in the 4th quarter tallying up 106 yards; 146 yards off 19 carries for the game. The Rams haven’t had a relevant running back since Stephen Jackson and haven’t had a premier back since Marshall Faulk. If the rookie keeps this up things can look brighter in the “show me” state. 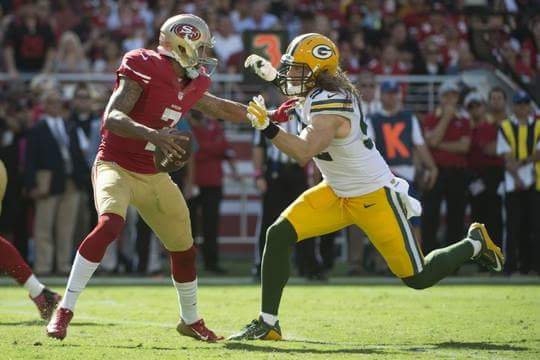 Time To KaePANIC
Things haven’t been the same for Colin Kaepernick ever since the Super bowl appearance against the Baltimore Ravens in 2012, the quarterback that had all the potential to be great has now raised significant red flags around his skill set. Kaepernick has regressed significantly as a passer. The average accuracy has diminished. His passes are equivalent to Aroldis Chapman’s fastball with 0 touch. He’s basically a one-trick pony these days, leading lackluster offense. Even though he signed a huge contract extension not too long ago, I’m not sure how much longer of a future Colin has in the Bay Area.

Teams Remain Undefeated
We have 6 undefeated teams left in the NFL (Bengals, Broncos, Falcons, Packers, Panthers, Patriots). ESPN said the odds of a team going 16-0 are at 2.8%, and that the Atlanta Falcons has the best chance of accomplishing that. I seriously doubt that will happen with that suspect defense, however it is fun to think about. Carolina has the worst offense on this list but their defense is rock solid. New England is on another level but their difficult schedule says they will slip up and that goes for Denver as well. Green Bay is definitely Aaron Rodgers or bust. The same can be said about Cincy with Andy Dalton. We’ll see whose the last team standing soon enough though.