It has been almost three months since the epic ending to the College Football Playoff National Champion Game where the Clemson Tigers defeated the Alabama Crimson Tide 35-31. Since then, schools have finished up their recruiting classes, the NFL Combine has come and gone (with the NFL draft taking place at the end of April), and Jim Harbaugh has upgraded his classic khaki pants to Lululemon pants.

Despite the heartbreaking loss in the national spotlight and losing key players such as Johnathan Allen and Reuben Foster, the Alabama Crimson remain favorites to win the National Championship next season. Nick Saban will bounce back with the top recruiting class in 2017. Saban has built a powerhouse over the past decade at Alabama, and the odds are “ever in his favor” to reclaim the crown. 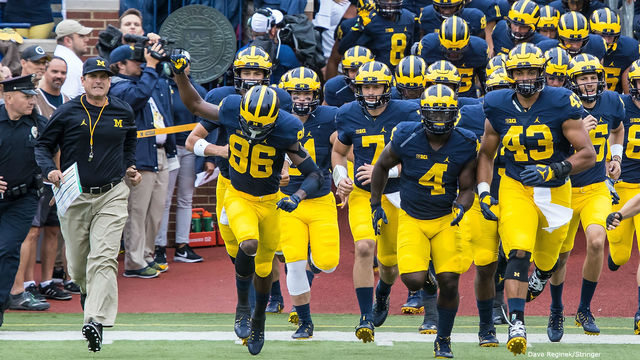 If the upgraded pants for Jim Harbaugh wasn’t enough to sway your opinion, Harbaugh’s recruiting should get your attention. According to Campus Insiders, the Michigan Wolverines have the 3rd best recruiting class entering next season. Harbaugh’s ability to use Satellite Camps in states like Georgia and Florida, along with is outspoken personality has helped turned this school back into the powerhouse of the early to mid 90’s. I believe the Wolverines will get over the hump and will face Alabama in the National Championship.

As a sophomore, Lamar Jackson ran away with the Heisman Trophy last season (3,543 passing yards, 30 passing TD’s, 9 INT, 1,571 rushing yards, 21 rushing yards). Louisville was in the playoff hunt for most of the season because of the play of their star quarterback. I believe a win against either Clemson or Houston, the Cardinals would’ve replaced Washington in the top 4. With another year of experience in the spotlight, Jackson is the favorite to repeat to hoist the Heisman.