Have you ever woke up in the morning, mad at your current situation instead of doing something that you love? Are you content in your day-to-day life and lack motivation to change? Even if you want to change what’s around you, do you feel that the obstacles in your path takes too much time and energy to overcome?

I feel like many of us have the same issues and are in similar situations. Well, I found our motivation. If this doesn’t inspire you or give you a spark to change your current situation, I’m not sure what will. His name is Shaquem Griffin.

Griffin was a linebacker at the University of Central Florida. The first time I saw him on television was this past December when UCF was playing the Memphis Tigers in the American Championship Game. He caught my attention because he only has one hand. Come to find out, his hand was amputated at age 4 but that didn’t stopped him from playing sports. He was making plays and helped his team win the football game.

He’s currently at the NFL combine pursuing his dream of playing in the NFL. Even though he wasn’t initially invited, Griffin has made the most of his opportunity this far.

His 40 yard dash time is the fastest by any linebacker since they started keeping track back in 2003. He had went above and beyond many people’s expectations.

Shaquem has inspired me to continue to pursue my dreams even at times I don’t feel motivated. He’s actions during the NFL combine has spoken volumes across the football community. It’s people like him who doesn’t let anything get in his way to achieve what he’s trying to accomplish. In life, a lot more people will tell you “no, you can’t…” or “you don’t have…” or “you’re not able…” instead of believing in your goals and dreams. I have nothing but respect for him, and I want him to succeed at the next level. Let his current story inspire you to do what you always wanted to do, even if it’s against all odds. 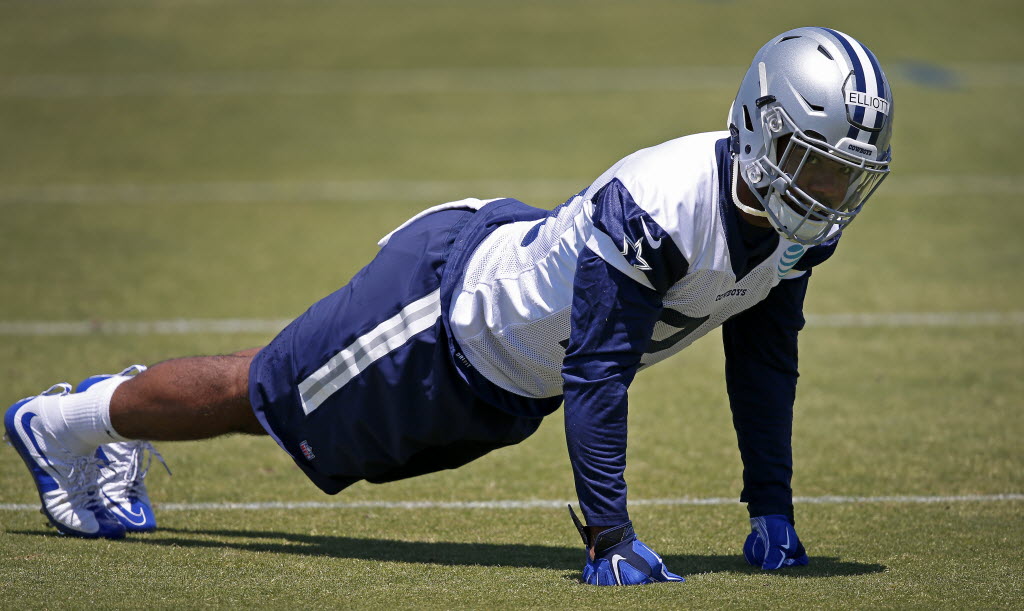 This is the perfect time to mock draft. Mock drafting now helps get your strategy together. I’ve started mock drafting a week or so ago. I have a friend who started soon after Independence Day (he’s won my league multiple times). This is equivalent to practicing for an event or a big game. Now is not the time to act like Allen Iverson about practice. By the time the real draft happens, you’ll be prepared and won’t be panicking. 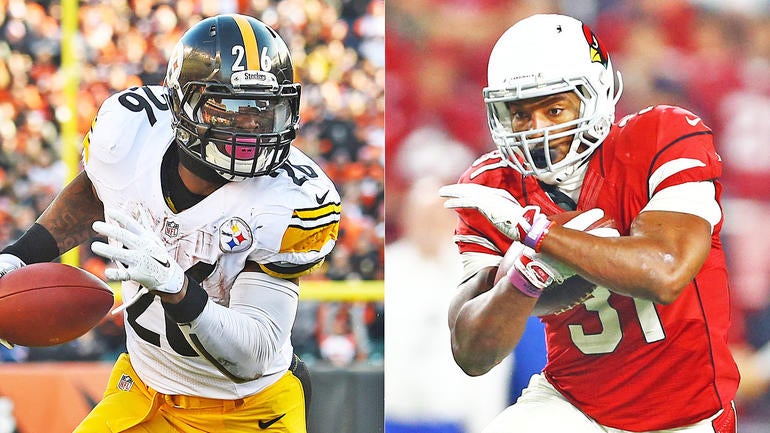 Le’Veon Bell of the Pittsburgh Steelers and David Johnson of the Arizona Cardinals finished the fantasy season strong last year. Now, these 2 are projected to go 1 and 2 in most pre draft rankings. Both of them are versatile and are heavily featured in their respective team’s offenses. Honestly, you shouldn’t go won’t choosing either of them. Personally, I prefer David Johnson this year due to Bell’s injury history. Also, he’s currently holding out in training camp.

Avoid Drafting in the First Round

Drafting wide receivers in the first round is starting to become a popular trend, but don’t shy away from the fundamentals: running backs are scarce. Last year, I did Antonio Brown was worth drafting with the 1st overall pick and he was (especially in a PPR league). With that being said, the two players you want to avoid drafting in the first round is Mike Evans and A.J Green. Both of them are elite wide receivers, but they’re not worth selecting that early. Mike Evans had a monster year last year, but the Bucs offense has upgraded this off-season. The additions of deep threat DeSean Jackson and first round draft pick O.J. Howard (tight end from Alabama) will take pressure off of Jameis Winston and Mike Evans. In theory, his targets should decrease. Same thing with A.J. Green. Cincinnati upgraded its offense by adding draft picks John Ross (wide receiver from Washington) and Joe Mixon (running back from Oklahoma). Along with a healthy Tyler Eifert, Andy Dalton will have a plethora to choose from. If you can get any of these 2 studs in the second round, you’re doing something right.

Sleepers
Here’s a list of players that should enhance your team later in the draft:

Fundamental Tips
Below are things you should consider:

Last, please remember to have fun. Being stressed out over your fantasy team will make the situation worse and less enjoyable. You may forget that you are a fan of the game. Enjoy yourself.

I went to draft town on Friday in Chicago and it was WAY better than I could ever imagine. They had a combine area for the fans that wanted to do the 40 yard dash, the high jump, field goal kicking, and much more. Former players were there to sign autographs, they had the NFL shop and museum, food from, vendors, and much more!!

And even Adam Schefter was there!

Congratulations to Marcello for winning
the JGoodWithSports March Madness contest. His prizes are on his way.

That game was one of the best that you will ever see in any sport so don’t take it for granted. I have the same emptiness when the Superbowl ended and football season was over (luckily we’re getting closer to the NFL draft).

NBA – My Bulls are about to be officially eliminated from playoff contention. This has been one of the most disappointing seasons that I can remember. It’s basically the same team as last year (adding Bobby Portis). The only thing changed is the coach and culture. We lost our defensive, gritty, and resilient identity. I’m not sure what will happen in the offseason but I wish we’ll get our defensive, gritty, resilient identity back.

NFL – The season is still some months from here but the NFL Draft is only a couple a weeks away. “Draft Town” will be in Chicago for a second consecutive year (a 3 day event for fans to meet former players, participate in activities, food, prizes, and have a chance to win tickets to the actual draft blocks away) and guess who’s going?? (Wait for it… You guess it.. It’s me!) I’m very excited. I wanted to go last year but didn’t have the courage to skip work for it. I will let you know how it goes.

MLB – My Chicago White Sox has started the season off on a positive note by winning 3 of 4 in Oakland against the A’s. Even though the Chicago Cubs are the talk if the town as the World Series favorite, we’re are projected to make a run for the AL Central. We added some much need bullpen help in the winter. Hopefully that’s enough to get some extra wins.

NHL – The Blackhawks are set to defend the Stanley Cup. The Dallas Stars and the St Louis Blues have been consistent all year. The Washington Capitals are looking like the favorites to meet of those 3 teams in the Stanley Cup. Personally, I want to see Patrick Kane and Johnathan Toews against Alex Ovechkin.

The Masters are underway this weekend. Honestly I’m not sure who will come out on top. I just hope it’s a close finish on Sunday (preferably down to the last hole).

There has been some superstar talent that has come into the NFL since 2005 such as Adrian Peterson, Richard Sherman, Andrew Luck, Julio Jones, and JJ Watt. However, on the other end of the spectrum is a few players who just flat-out didn’t live up to expectations. Whatever is may be health, off the field issues, or just bad play, they have ended up being a BUST. I’ve made my own top 5 over the past decade. Here’s my honorable mentioned list:

5. Vince Young (Texas 2006)
The former college football national championship star was the 3rd overall pick of the 2006 class to the Tennessee Titans. Young won rookie of the year and was named to the Pro Bowl. The next 2 seasons were pedestrian. After regaining his starting job (team started 0-6), Vince Young led the Titans them to 8 out of 10 wins. Bad play and immaturity led him to be of the most disappointing players in the past decade.

4. Matt Leinart (USC 2006)
The former Heisman Trophy winner was supposed to be the face of the Arizona Cardinals franchise with the 10th pick of the draft. Instead, he became apart of the infamous list of USC quarterbacks who doesn’t live up to expectations (Carson Palmer, Mark Sanchez, John David Booty, and soon to be Matt Barkley). Sprained shoulder injury and a broken clavicle in his first two seasons led the way for Kurt Warner. Leinart’s time in the NFL has been dim ever since.

3. Troy Williamson (South Carolina 2005)
After trading Randy Moss to Oakland, the Minnesota Vikings drafted Troy Williamson with the 7th overall selection to be the next deep threat for Daunte Culpepper. However, he wasn’t anywhere close of being a threat. In 3 seasons with the Vikings, he caught 79 passes for 1,074 yards with 3 touchdowns. His inability to catch ball caused him to receive limited playing time. He blamed is depth perception for dropping passes.

2. Trent Richardson (Alabama 2012)
Arguably the best running back entering the draft, he destroyed defenses with his powerful style of running, deceptive agility, and lateral quickness. The Cleveland Browns selected Trent Richardson with the 3rd overall pick. Unfortunately, Richardson wasn’t able to impact again because of lack of ball carrying vision. He saw limited playing time once he was traded to the Indianapolis Colts. He was recently cut by the Oakland Raiders. Former Pittsburgh Steelers and Washington Redskins safety Ryan Clark labeled Trent as the “worst running back of all time” (OUCH).

1. JaMarcus Russell (LSU 2007)
And then there’s… (drum roll)… JaMarcus Russell!!! He had one of the strongest arms you would ever see, allegedly throwing 60 yards on his knees. But the number 1 overall pick by the Oakland Raiders was doomed from the start when he elected to hold out his rookie year for a lucrative deal. He didn’t sign his deal until September. The combination of different head coaches and offensive coordinators, inability to make the right reads, and off the field issues (codeine syrup) led to his ultimate downfall of being labeled arguably the biggest bust in NFL history.